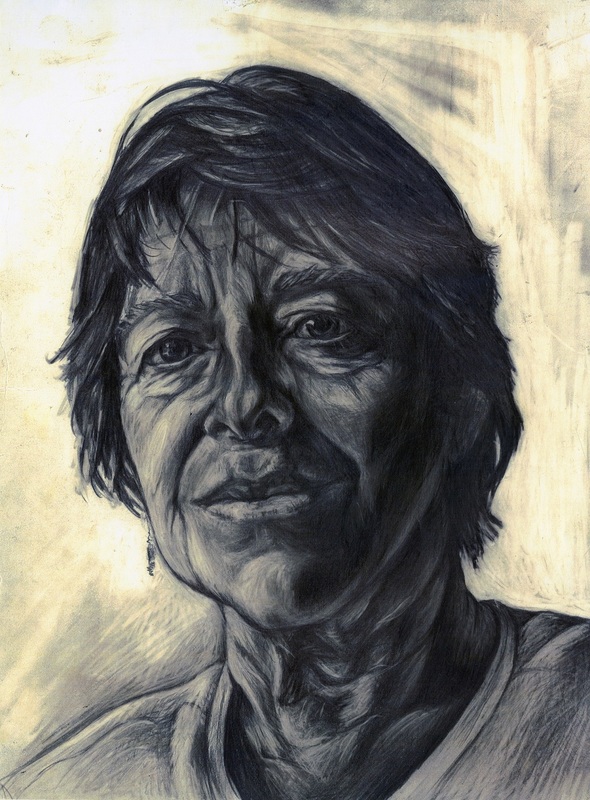 graphite and pencil on paper

Suzanne Whiteley (1935-2019) was born Suzanne Mehler on September 26, 1935 in Amsterdam. Her parents had recently moved to Amsterdam from Germany to escape persecution. The Germans arrived in Amsterdam when Suzanne was four and a half. They lived under increasingly restrictive conditions until the Germans took them in the beginning of 1943. Her family, along with many other Jews, were taken to a train station and waited for hours before they were put onto a train. The train took them to Westerbork concentration camp where they spent five to six months before being transported to Bergen-Belsen.

Her family arrived at Bergen-Belson in the late spring of 1943. At that point the camp was relatively empty, but it filled up quickly as new prisoners arrived daily. Suzanne and her family spent one and a half years in Bergen-Belson. Hunger was a major facet of her life in the camp and many of her memories are related to acquiring food and water for her family. While at Bergen-Belson she lived in constant fear and concern for her own life and the lives of her family. The night before the camp was evacuated by the Germans, the prisoners were told to sit near the front gate of the camp and wait for transport. She ended up sitting with her father who at that point had become weak and sick. She woke in the morning to find he had passed during the night, but he was thrown onto the transport truck with her, her brother, and her mother and they made their way to the trains. Suzanne and her family spent approximately two weeks on the train prior to being liberated by Russian forces. During her time on the train, she, her family, and many others had contracted typhus and were treated upon arrival at a small German village. Suzanne got better before her mother and brother, and lived alone and with other orphans for some time before her family got better.

After approximately four weeks in the small village, she and her family returned to Holland. However, there was a food shortage in Holland, so she and her brother were sent to Copenhagen to live. After some time, they returned to Amsterdam, but only for a year. Then in May of 1947 Suzanne, her mother, and brother moved to America. Suzanne eventually settled in Chicago and she is the mother of two daughters and one son.