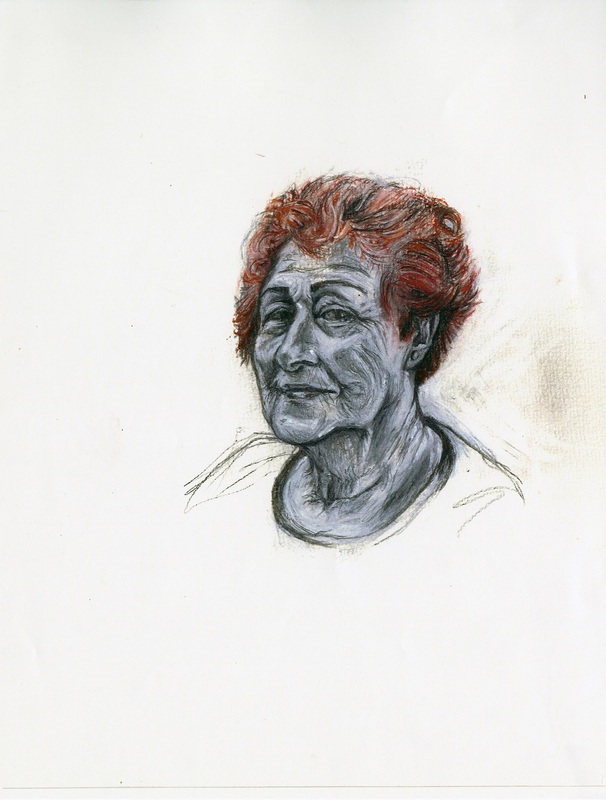 conte and pencil on paper

Esther Wasserman (1921- ) was born Esther Ajlman in Zwoleń, Poland on January 15, 1921. Within two years of Hitler’s invasion of Poland, she and her family were forced into the Zwoleń ghetto. Her family was broken up and Esther was deported to the Skarzysko-Kamienna concentration camp. During her time at the camp she experienced forced labor in a munitions factory, seven days a week, making bullets for the Germans. She was transferred from Skarzysko-Kamienna to the Tschenstochau concentration camp after a year, and was again forced into labor at a munitions factory.

Following her time at Tschenstochau, Esther was moved to Ravensbrück, Burgau, and finally Türkheim concentration camp. In the last days of the war she was forced to march with the rest of Türkheim’s prisoners until the SS guards told them the war was over and to go wherever they wanted. She returned to the village of Türkheim where she was taken in by a German family for a few days before being liberated by the American armed forces.

Shortly after the end of the war in 1945, Esther found and married her husband, Max Wasserman, in Germany. She made her way to America through Brooklyn, New York and was naturalized there on August 5, 1952. By the mid-1980’s Max and Esther had made their home in the Los Angeles metropolitan area. Esther Wasserman was the subject for one of Debra Howard's portraits of child holocaust survivors.