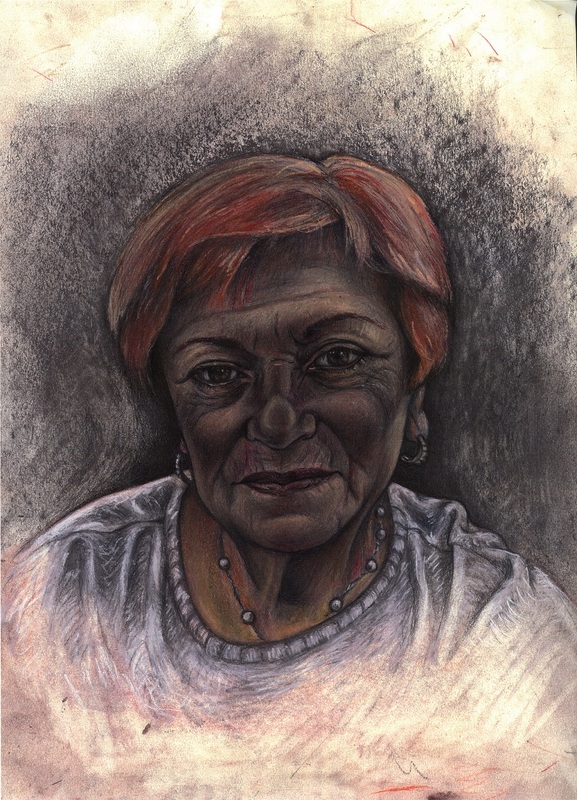 conte and graphite on paper

Natalie Gonenn (1936- )was born Natalie Rendler in Chelm, Poland—a small town near the Ukranian border—on May 15, 1936. She was three years old when Hitler invaded Poland. Her time during the Holocaust was dominated by hiding and running. For the first month or so, she and her family hid in barns, however Nazi soldiers were patrolling the area and threatening farmers with death if they hid Jews. Luckily, one farmer dug a small bunker in the middle of a field for her and her family where they lived for several months. The farmer became scared for his family and insisted that her family leave and try to cross the river to the Ukraine. One night, they all ran to the river, got in a small boat, and attempted to cross. The Germans discovered them and began shooting, which prompted Russian troops to begin shooting from the other side of the river. The boat capsized and fortunately they were pulled out of the river on the Ukranian side.

As the Germans advanced, their family was continually on the run. Eventually they were taken in by a Rabbi in Kiev, where they lived for a couple months. Her family fled as the Germans advanced and bombed the city. They were moved via cattle cars and experienced bombing for much of their journey deeper into Russia. They were asked to accept Russian citizenship, which her father rejected and her family was sent to a camp in Siberia. Living conditions were so bad that soon after, her father accepted Russian citizenship and her family returned to a town outside of Moscow. As the Germans advanced, her family was forced to run again and ended up in Uzbekistan. Natalie’s family spent approximately two years in Uzbekistan where her mother got sick and gave her and her brother to an orphanage. Natalie lived out the rest of the war in the orphanage and what she refers to as a sanatorium.

After the war, her family returned to Chelm, but it was still unsafe for Jews. As such, her family left and spent time at three displaced persons camps: Stuttgart Flandern Kaserne, Berlin, and Ulm. Her family ended up moving to Palestine by way of a ship called the Galila. They arrived in 1948 and she spent eleven years there. She served in the Israeli military and met her husband, Max Gonenn, while at university. They were married in Haifa in 1959 and shortly after moved to New York where they settled and started a family.