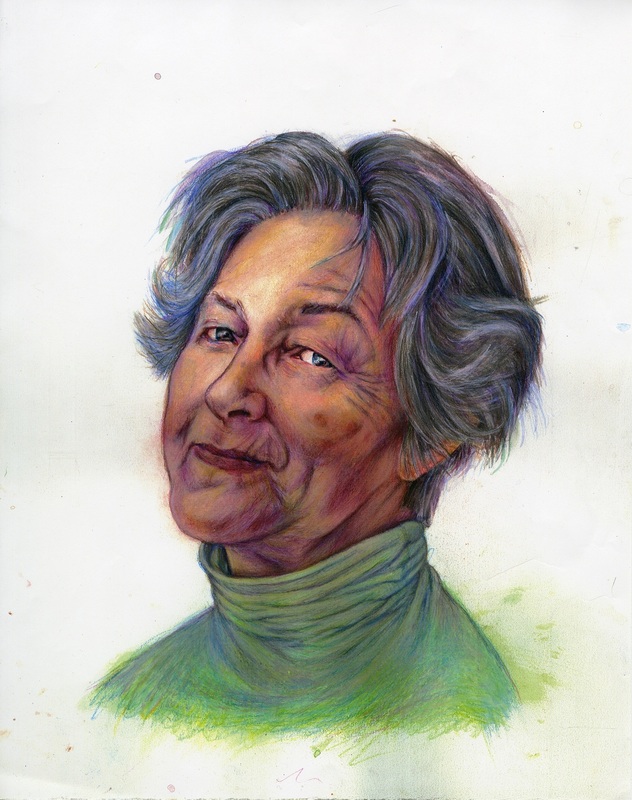 colored pencil and watercolor on paper

Ava Kadishson Schieber was born Ava Hegedis on April 12, 1926 in Novi Sad, Yugoslavia. Her family was well off and also very cultured. During the 1930s she was aware of the impending war both from the news and also witnessing ships of Jews being deported down the Danube. She had heard of Kristallnacht and knew of Jewish persecution happening elsewhere. Ava was taught by her parents to be prepared for a war that would likely come. Around 1940, her family moved from Novi Sad to Belgrade as they felt it would be better for their anonymity to live in a larger city. Ava remained in Novi Sad for one year to finish her schooling while she lived with her grandmother. She then left to be with her family in Belgrade. On April 6, 1941 the Nazis invaded Yugoslavia and bombarded Belgrade for several days.

On April 12, her birthday, the Nazis entered the city, and put up posters instructing all of the Jews to register with the Germans. Her family knew that this was not a good choice and decided to figure out how to hide. Her father left to hide in Hungary. Ava’s mother used her birth certificate to acquire ID papers as she had converted prior to marriage and her birth certificate said she was Christian. Her sister married a Greek Orthodox man and the priest predated the marriage certificate prior to the war to avoid any suspicion. Ava was the only one who could not get ID papers, so she went to hide at a farm where her father had made arrangements for her. Ava spent four years on the farm, taking on the identity of a farmhand. She did chores and would sneak back to Belgrade to visit her mother and sister when possible. During her time at the farm, she received very little food. On one of her trips back to Belgrade, her mother asked her to get rations. While waiting in line, a German soldier passed by her, and since she was not perfectly aligned with the rest of the line, hit her in the mouth with the butt of his gun, breaking her front teeth. Ava remembers that in the winter of 1942, the Jews of Belgrade were rounded up and drowned under the ice of the Danube. Ava is an artist and had been prior to the war.

During her time on the farm, she completed a few drawings which are at the United States Holocaust Memorial in Washington, DC. Near the end of the war, she decided to return to Belgrade. She found that her sister had died as a result of being taken to war. Ava went looking for her father and grandmother in Novi Sad, however when she arrived she was informed that she was the first Jew to return. A former neighbor told her that her father and grandmother were taken to Auschwitz where they both died. Her father played in the Auschwitz orchestra that performed as people were marched to the gas chambers. She returned to Belgrade with a few belongings from her former life and began to look for a job. She ended up going to the Art Academy in Belgrade and working as a painter and animator for movie studios.

In 1949, Ava and her mother left Yugoslavia for Israel. They arrived at the port of Haifa and quickly made their way south to Tel Aviv. She was immediately hired by a movie studio to do a similar job as she had done while in Belgrade. The man who hired her became her first husband—Yitzhak Kadishson. They were married for thirty years prior to his passing. About a decade later, a man named Nathan Schieber bought some of her art in America. They met several months after and fell in love. She decided to leave Israel and move to the Chicago area. She continued to paint, heavily influenced by her time hiding at the farm.