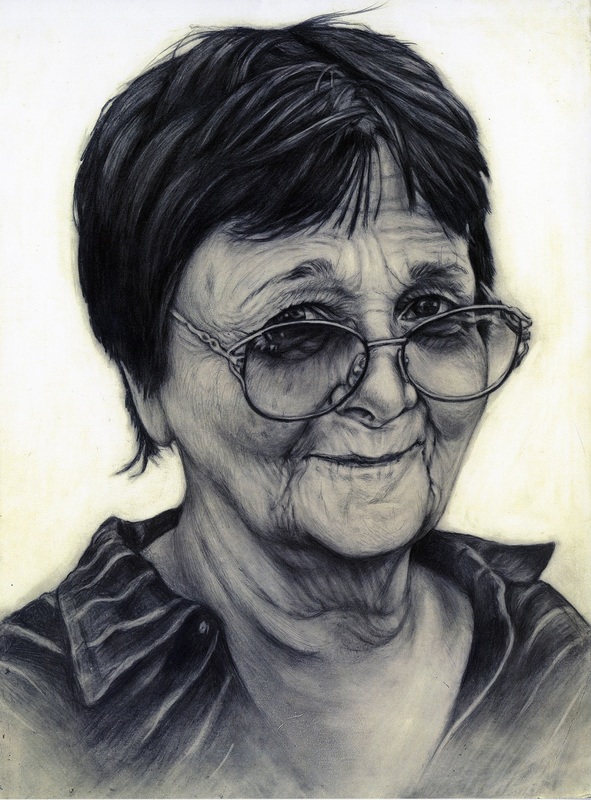 graphite and pencil on paper

Miriam Brysk (1935- ) was born Miriam Miasnik in Warsaw, Poland on March 10, 1935. At four and a half, she and her family experienced the bombardment of Warsaw by the Germans. Shortly after the bombings, her family decided to move to eastern Poland and settle in Lida which was occupied by the Russians at that point. In 1941, Germans attacked the Soviet Union and Lida, gaining control of the city. Her family remained, and in December of 1941, Miriam and her family were forced into the Lida ghetto.

On May 8, 1942 Germans and nazi-sympathizers rounded up all of the Jews in the ghetto, and brought them to a checkpoint where they were sent left or right. Miriam’s family was sent to the right, which turned out to be a mass grave where troops were executing Jews. Approximately 80 percent of the Jews in the Lida ghetto were murdered that day. Luckily, her father was an accomplished surgeon and was able to negotiate their escape from that fate. At that point, her parents sent her to hide with a non-Jewish family just outside of Lida, fearing that the Germans were going to come to the Ghetto and exterminate all the Jewish children. When that turned out not to be true, Miriam returned to the ghetto, but not for long.

In November, 1942 her family left the ghetto to join the partisan fighters in the Lipiczany Forest. Miriam spent two years with her family in the forest. Her parents cut her hair and dressed her as a boy as rape was commonplace among the partisans, defectors, and others living in the area. In the early summer of 1944, the Russians liberated the partisans and individuals living in the forest. The Russians assigned them a new place to live--Szczuczyn, a Belorussian town. However, her family did not want to live under communist rule, so they escaped to Lublin, Poland. From there, her family moved to Czechoslovakia, Hungary, Romania, back to Hungary, Austria, Italy, and finally a displaced persons camp called Monte Mario in Rome. After a couple months at the displaced persons camp, they acquired visas to go to America. They left from Naples and traveled by ship to New York where they arrived February 23, 1947.

While she had a difficult time acclimating to America, Miriam was quite successful in her life. She received her bachelors in Biology and Chemistry from NYU, where she also met her husband Henry Brysk. Miriam went on to receive a masters in microbiology from the University of Michigan and a PhD in Biomedical Sciences from Columbia University. She published extensively in her fields and after retiring around 2000, began to work on art and Holocaust awareness.