Rachel Szalit-Marcus was a painter and book illustrator. She spent her childhood in Lodz and in 1911 went to study at the Munich Fines Arts Academy. There she met and married Julius Szalit, a successful Jewish actor, and they were together until he committed suicide 1919. In 1916, they moved to Berlin, where Rachel exhibited with the artists of the Secession group and became a member of the November group, young avant-garde artists who joined forces after the November Revolution of 1918. When the Nazis assumed power in 1933, Rachel Szalit-Marcus fled to Paris, a haven for refugee artists. The “Paris School” artists were considered degenerate and banned when France fell to Germany in 1940. In 1942, she was arrested and sent to Auschwitz concentration camp where she was murdered.

She painted portraits, flowers, and still-lifes but little remains of her work after her Paris studio was ransacked by Nazis. Her best-known works consist of lithographic illustrations to books by Mendele Mokher Seforim, Shalom Aleichem, Israel Zangwill, Heinrich Heine, and Martin Buber.

These four works by Szalit-Marcus found their way to the Beck Archives through Maria Lowenstein. When Maria's works were donated, works from a few other Berlin artists were mixed in. The relationship between the two artists is unknown but given how acitve the Lowenstien's were is the creative community, it is likely Maria and Rachel knew each other. 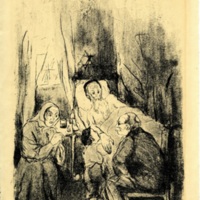 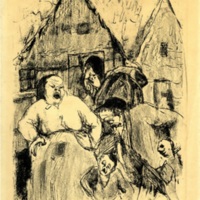 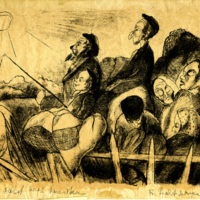 "Die Fahrt Nach Amerika" or "The Journey to America", circa 1920 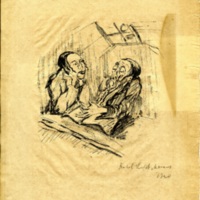