Henry Lowenstein was born Ernst Heinrich Loewenstein on July 4, 1925 in Berlin, Germany to Dr. Max Moses Loewenstein and Marie [Maria] Lilli Margarete Batge Loewenstein. In 1939, an English family agreed to sponsor Henry and he left Berlin on the Kindertransport. His family remained in Germany until 1946, when the emigrated to the United States. In 1947, Henry was finally able to join his family in the United States after emigrating from England.

After graduating from the Yale School of Drama in the early 1950s, he was recruited by Helen Bonfils for the prestigious Bonfils Theatre on East Colfax Avenue in Denver where he worked until 1986. Henry then founded the Denver Civic Theatre and produced creative works until he retired in 1995. No doubt influenced by his artist mother, Maria Lowenstein, Henry created countless theater designs throughout his career. Henry Lowenstein died in Denver, Colorado on October 7, 2014. 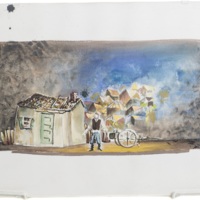 Tevya from "Fiddler on the Roof" Scene Panel, circa 1970 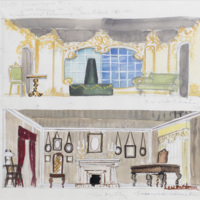 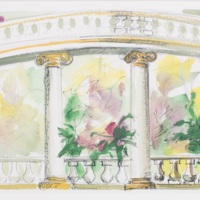 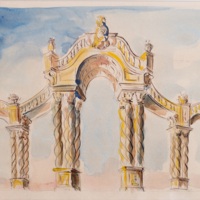