No More Pios: The Legacy of Settler Colonialism and the University of Denver

The #NotYourMascots campaign started in 2014 on social media by journalist Jacqueline Keeler (Diné and Yankton Sioux). She explains that the mission of the campaign is to "combat the public misappropriation of Native American imagery, and [call] out entities complacent with, as well as ones directly profiting from, blatant racism." Though #NoMorePios aims to address the "Pioneer" moniker and the associated mascots rather than the appropriative imagery of Native peoples, the two have similar goals. This image and the rest of the exhibit show that the "Pioneer" nickname, used since 1925, has been associated with the glorification of settler colonialism and related cultural appropriation of images of Native peoples.
Other schools in the American West with similar mascot and nickname histories have changed their mascots in response to student protest and engagement. In 2016, the student newspaper of Whitman College (founded 1859) in Walla Walla, Washington changed their name from “The Pioneer” to “The Whitman Wire.” The editors wrote, “At the time the paper was founded, the college was in the midst of reinforcing a telling of history that celebrated the arrival of white invaders–pioneers–to the Columbia Plateau. According to this story of the pioneers, they arrived in an empty and savage land. In reality, they were coming into the homelands of the Cayuse, Walla Walla, Umatilla and other peoples who have inhabited this land for as long as any can remember.” (Johnson, Cornett, and Clay, 2016). The California State University campus at Long Beach removed a statue of “Prospector Pete” from the courtyard (Del Real, 2018). Another campus of California State University at East Bay removed Pioneer Pete as their mascot in 2018. The University has, however, retained the “pioneer” moniker (Diaz, 2018).
While the Pioneer moniker persists, continued harm to the original inhabitants of the land that the University of Denver sits on, and all Indigenous peoples, is inevitable.
Warning: This exhibit contains materials that are racist and may be painful or traumatizing to viewers. 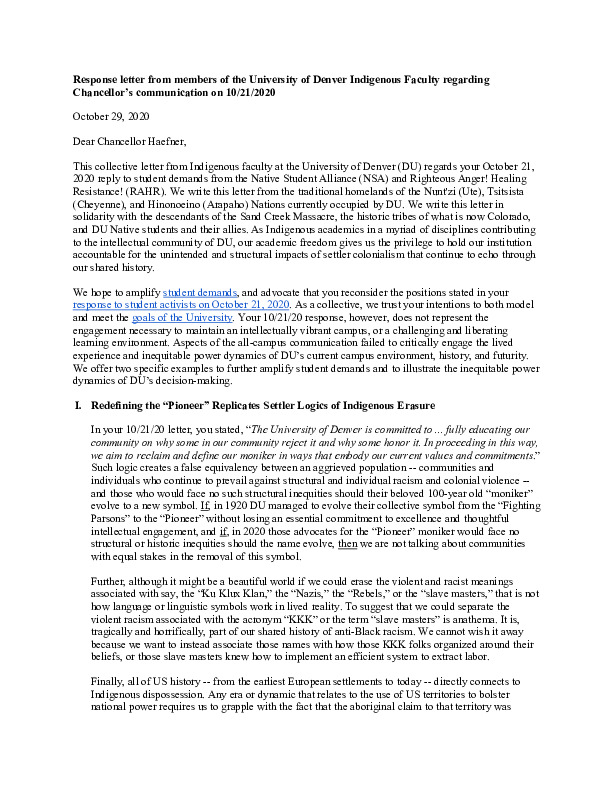 Response letter from University of Denver Indigenous faculty regarding Chancellor's communication about the Pioneer moniker and other RAHR demands on October 21, 2020. 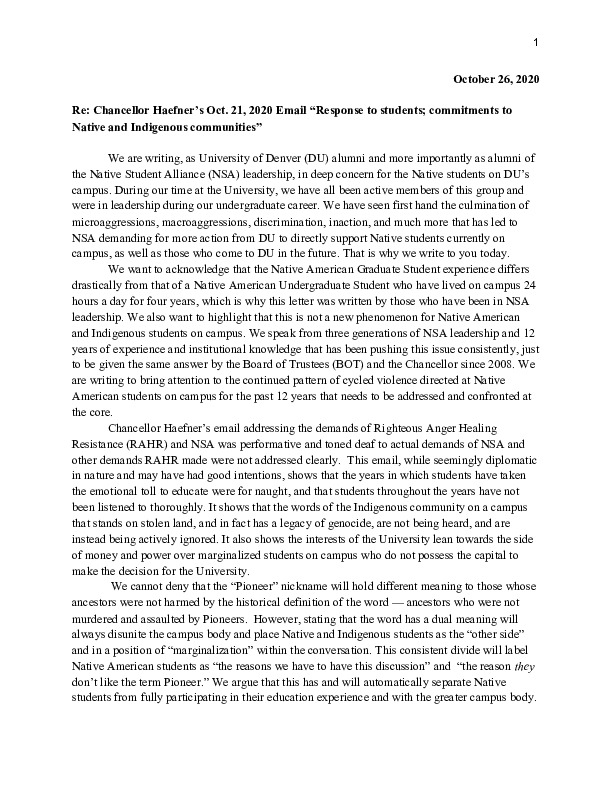 Response letter from Indigenous alumni to Chancellor Haefner's October 21, 2020 communication about the Pioneer moniker and other RAHR demands.